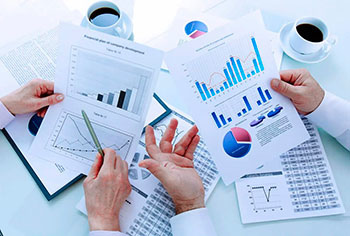 You've probably already wondered what makes investors make this or that decision? They can't constantly try their luck, relying on chance and lucky fate. To be honest, despite the fact that luck has always been an integral part of any decision, first of all, traders are guided by the analysis of the current market state, to which we propose to proceed.

There are two main ways to assess the current market situation: technically and fundamentally. Technical analysis is aimed at studying the past price dynamics of any asset of interest to predict its future behavior. Fundamental analysis does not study history and does not try to predict future dynamics from the past. On the contrary, it analyzes those economic, social and political conditions that determine the ratio of supply and demand for financial market assets.

If you want to buy a currency at the market price, then you focus on the Ask price, and if it's about selling— on the Bid price. In order to open a deal at the market price, it is necessary to specify in the type of transactions — immediate execution, which is the main parameter for the instant execution of our order and opening a position at the prices present on the market at the moment.

So what should be guided by: technique or foundation?
In truth, there is no clear and convincing answer to this question. But we know exactly where to look for him. Strangely enough, but the answer is inside us, because only we know better what is more convenient, reliable and preferable for us.

To begin with, let's deal with fundamental analysis.

Like any other, the foreign exchange market obeys the classical laws of supply and demand. The increase in the value of a currency is a consequence of the excess of demand over supply, and vice versa, if supply exceeds demand, the value of the currency decreases. But what factors influence supply and demand?

There are two key macroeconomic parameters that determine the value of a currency asset — the trade balance and the movement of capital. If you delve into economic theory, you will easily notice that these parameters are components of the country's balance of payments, which, in turn, analyzes the supply and demand for the national currency over a certain period of time. A negative balance indicates an outflow of capital from the country, and a positive one indicates an influx, i.e. an increase in demand for the national currency.
There is a whole section of macroeconomic indicators published by countries to determine the state of the economy as a whole, which in turn is immediately reflected in the strength of the national currency. Agree, if we are praised, our self-esteem is growing, the same thing happens with countries: if good data is released, for example, on the labor market, then the economy feels great, and in this case the national currency will also be on top.

But enough words, let's move on to the essence of fundamental analysis, namely, to the main indicators that influence the Forex market.

On November 2, at 15:30 Moscow time, data on the change in the number of people employed in the non-agricultural sector were published, according to which, in October, 171 thousand new jobs were created in the United States, which significantly exceeded analysts' expectations. As a result, the dollar received significant support from its own labor market. Naturally, it would be logical to buy the US dollar, for example, against the Japanese yen (USD / JPY is a classic trading tool after such events).

Let's calculate the economic result of this transaction, subject to the purchase of 1 classic lot of USDJPY: 45 points * 10 (the cost of a point) = $ 450 profit.

Indicators of the dynamics of production and trade.

Industrial production index, capacity utilization index, volume of industrial orders, industrial stocks, orders for durable goods, retail sales, volume of commercial credit, volume of loans for real estate, volume of consumer loans issued. Such indicators characterize the state and prospects for the development of the manufacturing and trade sector of the country's economy, including: domestic demand in the country and the willingness of companies and individuals to spend money, the level of development of industrial production and its dynamics, potential domestic demand for the national currency from consumers.

Indicators of monetary regulation of the economy.

The discount rate of the Central Bank, the planned volumes of placement and repayment of government securities, the planned volumes of attraction or repayment by the government of external loans (dynamics of public debt), indicators of money supply (money supply): M1, M2, M3, indicators of the business cycle, as well as indices of economic (business and consumer) activity and optimism.

Monetary policy indicators are among the most important. They show what kind of policy the government is going to pursue at this stage of the economic cycle and what methods it uses for this. These indicators include mandatory reserve numbers, refinancing rate (rates), indicators of operations of the Ministry of Finance or the central bank on the open market, changes in monetary aggregates. Activity and optimism indices are usually survey indicators that express the confidence of investors, consumers or other groups of economic agents about their current and future situation. For example, consumers' confidence in the future indirectly indicates whether they will buy durable goods, whether they will use loans and whether they are generally willing to spend money instead of saving it. And confidence in the future of companies will directly affect their activity in relation to investments in business expansion.

Indicators of the construction sector.

The lesson is prepared by Amarkets

© 2011 - 2022 AnteroFX
The information provided on the website is for informational purposes only, and is not a guide to action